The view into Richardson Bay

Wow! Sausalito was nothing like we thought – the bay as we discovered had become the spot for all the local live-aboard’s due to upgrades to marine anchorages elsewhere in the bay area.   This mean’t cruisers that wished to anchor were mostly out at the end of the bay which was more effected by ferry traffic ( all day ) and the afternoon 25kt blow which seem a regular occurrence.  The town turns out to have an intense tourist area around the ferry terminal which brought San Francisco visitors over for the day.  Maybe a mile down the road that facade drops away to a small town,  we found out that the nearest Safeway where food was more reasonably priced took a 30 min bus ride to get to.  I realized one of the cruising skills no one talks about is the ability to find out where the “real community” and services are, being a little rough at this it took a couple of days to figure out.  The local people were all fantastic and helpful. List Marine had all the Yanmar parts I need in stock at 1/2 the Canadian prices, Johnston Hicks helped solve the ICOM radio issue – in the end we needed a new Commander mic, and Dave’s Outboard repair actually had the spare parts needed for our Tohatsu outboard.  Laundry done and the list mostly dealt with we decided to retreat to Angel Island for a few days. We anchored in a little cove just east of Ayula Cove in front of the old Immigration Buildings, lots of current but we were out of the wind for the most part.  We loved all the history and hiking and I’m sure on a clear day from the island peak the view would be spectacular but alas the fog prevented us from seeing much.  In 1776 the first fort was built on the island and from then on had a busy history -was the centre for immigration clearance, WWII troop deployment and return centre, even had missile silos from the cold war era and now a park with tours coming and going all day! 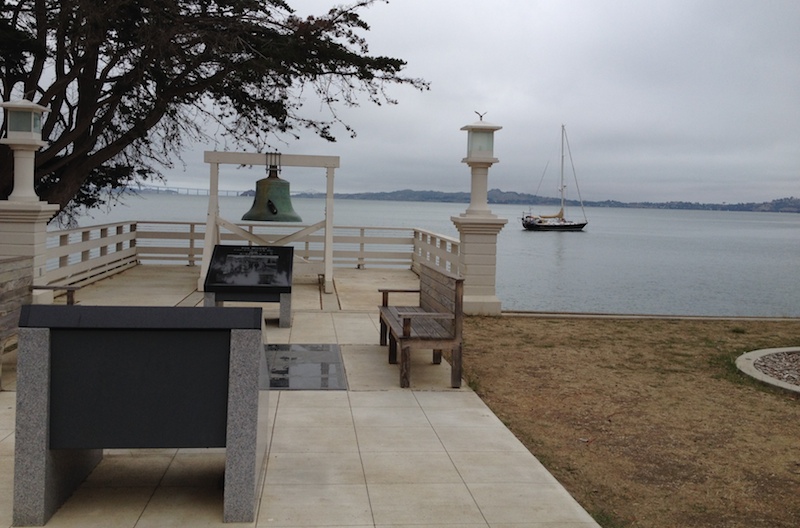 The Liberty Bell on Angel Island where immigrants from Asia arrived

Oh, I should mention there are 100 sailboats for every motorboat, every day the bay is spotted with sailboats every where!  We made contact with Bill and Liddy of the Passport users group who were headed up the delta and insisted we do the trip, so a quick trip to Safeway and the next adventure begins.

Where in the world are we?